We all are humans, if we are born in this world, then someday we will also die. This is the life cycle that everyone has to follow. The hard fact is, no one knows when or how you will die. Death also means that we might loose someone dear to us which makes it obvious that why we tend to ignore this topic. I am not intending to talk about death in a negative manner, but I would just like to share a story of a women who knew she’s about to die and what she wished for. Her wish was a little unusual, something that was unexpected!!

Disclaimer: This story is about a brave individual who is not among us anymore. I saw her struggle and she told me her story as a friend. I asked for her permission before she passed away, if I could tell her story out loud to others, she agreed. The most I coud do to honour her is respect her privacy, I would like to tell you that I have changed her name. But what happened with her, really did happen!!

As I have told you before, I am a visiting hospice volunteer and I assist patients with their end-of life journey. Therefore, whenever I see my patient for the first time, I need to mentally prepare myself that they may not be around for a long time.

Jacky was my first patient and thinking about her made me feel helpless. The doctors said that her prognosis is one year.

When I first met her, to my surprise, there was a certain warmth in her smile she was positive towards life. Whereas, I thought, she would be upset at her life as she knows she won’t be able to fight breast cancer. When I got to know Jacky, I understood the reason why, she had to be, she had no choice!!

As I came to see her, she got attached to me and saw me as a person that she could talk to and depend on whenever she felt low. That’s because she did not want that her children should be bothered by her troubles. I once asked her, “When did you come to Canada?”, just as a topic to start a conversation as I saw her a little upset. She gave me a slight smile and she blankly said, “It’s a story that I would rather not say out loud to myself, how can I tell you Gayatri?” I felt that she is uncomfortable, that’s why I decided to change the topic. To my surprise, she asked me again, “Gayatri, would you really like to hear? You sure you’re strong enough for this one? I would really like to get it out of my chest. No one has cared about me enough to ask me this question. I ant that someone should hear me but was anxious to share before.”

It made me feel that people have several layers, we can’t be sure that we really know someone. Really knowing someone means being aware of every single layer of an individual. That was something Jacky was about to share with me. I had to be mentally prepare for what was about to come!!

Jacky started off by telling me that she as married when she was 17 years, as her family and cultural values emphasized that girls should be married early. She lived in a small village in Ukraine. She wanted to study, but could not as her in-laws did not want her daughter in-law to go out and work but should rather stay home and cook. Then, she became a mother at the age of 20. Unfortunately, when she was sitting with her husband and her son while an artist was painting their portrait, her son ran to the street and a car hit him. Her son died right in front of her eyes, therefore, as a result she was diagnosed with depression. When she turned 22, she lost her brother as he served the Ukrainian army. Moreover, she even lost her younger sister when she was giving birth. She has been loosing a lot of people in her life.

Jacky’s husband could not see her suffering, he decided that it was time for a change. Her husband talked to an immigration agent, which led them to apply for immigration to Canada in the hopes that Jacky would feel better. But destiny had something else in store for them, the agent they contacted, told them that they have to apply for immigration after they land in Canada, nothing needs to be done before. At that time, no one was aware about the laws. Therefore, they believed the agent and came to Canada on a ship. The couple came with their two daughters, their third child was born in Canada.

Since the day they have landed in this country, they have been fighting to get equal rights as a citizen. Her husband has been working tirelessly to gather enough money to apply for citizenship. You won’t believe, they have applied for citizenship five times, and their application has been rejected. Even after having a child who is a Canadian citizen and contributing to the Canadian economy. Moreover, their daughter’s left their post-secondary education as both had to earn money for their parent’s medications.

It’s been 3 years Jacky has been diagnosed with breast cancer and she has to pay for each an every treatment, medication and checkup herself as she is not considered a legal immigrant in Canada. This is because, free health care privilege is only given to PR residents and Canadian citizens only. Her parents wanted her to be a legal citizen as she has been living in Canada and working so hard since 30 years. Her father could not take it anymore, before I got to see Jacky for the first time, her father just passed away a week ago. He passed away due to a sudden heart attack.

Hearing her losses, struggles and her feelings about them made me feel, my problems are not even actual issues in front of her. She has seen death from very close. Between this, how could I tell her when she asked me about my citizenship? How could I tell her that I just got my Canadian citizenship a month ago? It was a very guilty feeling, to protect her, I lied, I told her I am stil in the process of applying for citizenship.

When she was telling me this, she shared every single detail.. from the day she saw her son’s death to her father. EVERYTHING!! Everything as drastic, I could feel her pain. I could now understand, no matter what I do or say, it will not make her happy. I could see that she is smiling but she isn’t completely there. I could not take it.. as soon as I went home, I cried my room. When my parents came home from work, I told her what Jacky went through. I also told them one last thing that Jacky told me before I left her place…

HER DEATH WISH: I WANT TO BECOME A CANADIAN CITIZEN BEFORE I DIE!! I KNOW I DO NOT HAVE MUCH TIME AS I AM IN CONSTANT PAIN!!!

Would you believe me if I tell you what happened after that???!!!!

I wish Jacky did not tell me her death wish. After she shared her wish, a week after when I called her to confirm my visit, a social worker picked up the phone and informed me that Jacky is no more!!!

I could not believe what I heard!! I confirmed again.. it seemed like nothing makes sense anymore. It was a horrible feeling. I have lived a perfectly protected life and have never felt how it feels like to loose a loved one. Even though Jacky was a total stranger, but I did form a bond with her. She taught me a lot of things!!!

In the loving memory of Jacky!!!

I love you Jacky!! I know you are watching me from up there. I miss you, even though you were way older than me, you always considered me as a friend and shared everything with me. Thank you for trusting me with your story, I hope wherever you are, the world gets to admire your strong will of never giving up!! I will always remember you!! I will always be your ‘brown girl’!! 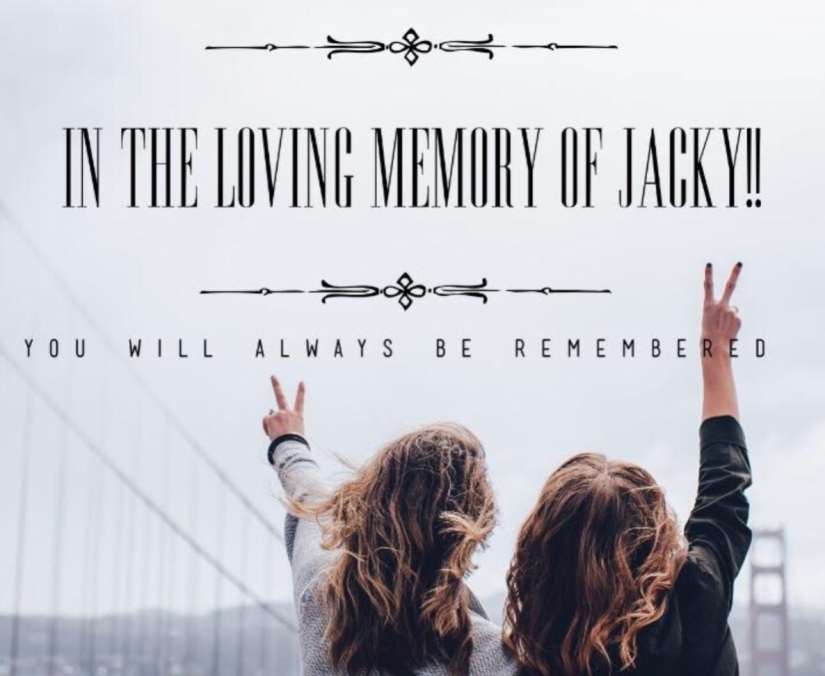 I am a mental health blogger who focuses not only on mental health but also the overall well being of an individual. Looking for others to understand my view of the world and hope I could also understand others. View all posts by gayatrisidhu